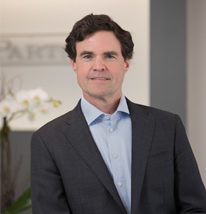 Since starting at Bourne Partners in 2011, Minor has been responsible for direct investment activities and has been very involved in both the Phoenix Therapeutics, Inc. joint venture with The Carlyle Group, as well as with the creation, management, and asset disposition of Covis Pharma S.à.r.l (“Covis”). Minor also served on the Board of Covis from inception to exit.

Over the course of his career, Minor has been involved in over $10 billion of financial transactions spanning the range from venture investing, private equity, mezzanine and senior debt, project finance debt and equity, cross boarder preferred stock issuances, sell-side and buy-side M&A transactions (both large cap and middle market) and other corporate finance advisory assignments. Minor has also served on the Board of Directors of a number of companies over his career.

Minor began his business career in 1984 in Corporate Banking at NCNB/NationsBank/Bank of America and became a Senior Relationship Manager in the Baltimore/Washington loan production office before deciding to attend business school in 1990. After an M.B.A. internship in corporate finance at The Coca Cola Company in Atlanta, Minor accepted a position as an Associate at Bowles Hollowell Conner & Company in Charlotte. Minor left Bowles Hollowell to co-found The McMillan Group with former U.S. Congressman Alex McMillan. The McMillan Group was a corporate finance, investment and government lobby organization. Minor also worked as a Managing Principal at Piedmont Venture Partners. Minor returned to Bank of America in 2002 to join the Strategic Investment function that managed strategic investments across the bank’s business lines, a function he eventually managed. He was then recruited to manage Corporate Development for the bank’s Global Treasury Services ($4 billion in profit). In 2007, Minor decided to join Christofferson Robb & Company (New York and London) to raise capital and work on the initial London project team of the firm’s offshore wind farm (Thanet Offshore Wind Limited) which it acquired in distress when the project was in the planning stage. After all the construction contracts were finalized, the project was sold to a private equity firm in 2008 and become the world’s largest off-shore windfarm post completion in 2011.

Minor received a B.A. in Economics from Davidson College in 1984, as well as an M.B.A. (honor society) in 1992 from The Kenan-Flagler Business School at UNC Chapel Hill.

Outside of Bourne Partners, Minor currently serves on the boards of Pacific Coast Bancshares (a privately owned, California-based correspondent bank) and on the Board of the N.C. Zoo Society. Minor has also previously been involved with a number of other eleemosynary institutions and efforts including being appointed as Deacon and Stephen Minister at First Presbyterian Church in Charlotte. Minor lives with his wife Tiffany and two children (Minor and Sara Frances) in Charlotte and enjoys golf, tennis, working out (yoga, running, general fitness) and has been known to play lacrosse every now and then.