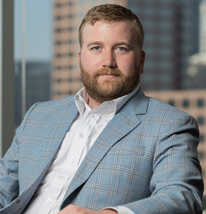 As Chief Operating Officer and General Counsel at Bourne Partners, Chris Inklebarger oversees the firm’s operations and strategy execution.  He also spends time evaluating investment opportunities and working on select management consulting assignments. Chris heads up all of the firm’s administrative and operational units, including; legal, marketing, accounting, IT, HR, our fantasy football league, and the office NCAA Tournament pool. Chris also serves as the Chief Compliance Officer and AMLCO for Bourne Partners Securities, the firm’s registered broker dealer. He has held various positions and roles within Bourne Partners and its affiliated companies throughout his career with the firm, joining the team full-time after working as a summer associate during business school.

Chris received his B.S. from the University of Tennessee and earned a J.D. and an M.B.A. from the University of Tennessee College of Law and the Haslam College of Business. As everyone likes to point out in meetings, he is a licensed attorney and the butt of various jokes. Prior to joining Bourne Partners, Chris worked with the Triple-A affiliate of the White Sox, the Charlotte Knights (unfortunately not as a player).

Outside of Bourne Partners, Chris is a self-taught illustrator with the ability to draw a particularly convincing Peppa Pig. In addition, Chris enjoys golfing (mostly poorly), cooking (not too poorly), and occasionally hunting and skiing (both poorly). When he’s not telling people around the firm what to do, Chris is often being told what to do by his wife, Bridget, and their two daughters, Ella Jean and Laine. He also actively supports the Beyond Limits Program at the Harris YMCA, Urban Promise, and the University of Tennessee.